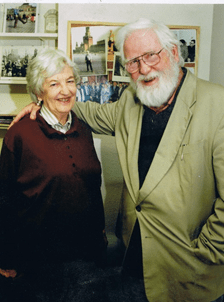 Child Health International (CHI), originally named the International Integrated Health Association (IIHA) was founded by Roy Ridgway in 1992. Roy was a medical journalist and former editor of the BMA News Review (a magazine for doctors) and of the BHMA journal, Holistic Medicine. A well-known figure in Moscow, he had spent seven years organising medical exchanges on behalf of the UK-USSR Medical Exchange Programme (now HealthProm) and had also been European Press Director of the International Physicians for the Prevention of Nuclear War (IPPNW), which won the Nobel Peace Prize in 1985 for the part it played in the dissemination of the facts about the medical consequences of nuclear war. Roy was one of the party to go to Oslo to collect the prize.

Roy and his wife Dorothea had a son (Tony) who had cystic fibrosis and died at the age of 29, and on a trip to Moscow they visited the Republican Children’s Hospital to find out how children with CF were treated there. And they discovered that the diagnosis and care of CF patients in Russia was in a very poor state with almost no Russian child with CF reaching adulthood. Having had a child with CF, they were appalled by the situation, and set up the first major project of the charity to help improve the outlook for children with CF in Russia.

Roy and Dorothea, along with a small number of dedicated staff managed the project from an office in Winchester. The medical team was led by Dr Chris Rolles (our current President) from University Hospital Southampton, and the project had a major impact on the treatment of children with CF in Russia, with a doubling of life expectancy in just three years of the project.

Drawing on the experience in Russia, another large CF project was launched to help children with CF in Odessa, Ukraine; this time involving a team of health care professionals lead by Dr Mark Rosenthal from the Royal Brompton Hospital, London.

The main sources of funding for both these early projects came from Tasis/Lian, a grant making organisation set up by the European Commission following the collapse of the Soviet Union, and Charity Know How, a Foreign and Commonwealth Office initiative. But funding also came from personal donations and local fundraising events.

At the time, the charity was also exploring other opportunities to address threats to health and wellbeing through an integrated approach, and running concurrently with the two main CF projects in the 90s were some smaller projects for children with other conditions. For example, to help children with congenital heart disease in Russia and Lithuania, involving a team from the Wessex Cardiothoracic Centre.

Roy died in late 2000, but his work has continued in the same vein, although the charity now concentrates solely on supporting children and young adults with cystic fibrosis. Dorothea remained a driving force and inspiration to the charity until shortly before her death in September 2008.

The charity has always been indebted to the many people who have given their time and energy to helping make a success of the charity’s projects.

Still based in the Winchester area, but with the work of volunteers and medical teams from across the UK, Child Health International has spread its reach to other Eastern European countries, India, and Greece.

It continues to help foster a sustainable environment where CF is diagnosed early, and best possible treatment is provided involving different disciplines and the child’s family. We achieve this by partnering host countries in a twinning arrangement in which the charity facilitates the transfer of know-how from doctors, nurses, physiotherapists, family support groups and other parties with whom we have links in the UK to their equivalents in the countries where we work. By encouraging treatment to expand beyond the walls of the hospital into the home, we can improve the lot of children and young adults with CF with a minimum of financial investment.

Emerging from the global pandemic, we wanted to do something as a family. We want to raise much needed funds for Child Health International’s work and continue to support the work that my father began. After multiple failed attempts and Covid-19 race cancellations, we’re taking matters into our own hands. On the 30th October, myself and 7 other members of the Ridgway family, will each be running 10 km along the Loire river in France- that’s an 80km Ridgway run!

To sponsor this event, please click below and give generously. Every penny counts!

Sponsor Michael Ridgway
Sponsor other members of the Ridgway family

Click here to watch a short BBC documentary on the work of the charity in 1996 with interviews with Roy Ridgway and Chris Rolles.