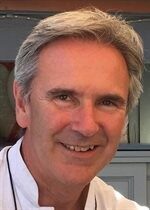 Child Health International is delighted to introduce our new Patron, Professor Gary James Connett  MB, ChB FRCPCH, MD. Gary is an Honorary Professor of Paediatric Respiratory Medicine and a Consultant in Paediatric Respiratory Medicine, and we are thrilled to have his support and expertise to drive forward Child Heatlh International’s vision of a world where all children and young adults living with cystic fibrosis have access to the best possible CF care, regardless of where they live. Read on to find out more about the newest member of our team.

Gary is a Professor of Paediatric Respiratory Medicine at University of Southampton. He is regional director for paediatric cystic fibrosis (CF) services across Wessex and provides comprehensive secondary and tertiary specialist services for respiratory problems in children and young people.

He has served as the paediatric representative for the UK Cystic Fibrosis Medical Association and as a member of the Research Scientific Oversight Board for the Cystic Fibrosis Trust.

Gary’s main research interests are in CF and Asthma. He collaborates with the National Biofilms Innovation Centre investigating and developing new approaches to treating chronic lung infections. He collaborates with the Department of Sports and Exercise Science at the University of Portsmouth investigating the use of exercise regimens to help improve the fitness and wellbeing of people with CF. He also has an interest in CF nutrition and has developed clinical tools for assessing pancreatic insufficiency.

Having helped establish Southampton’s Respiratory Biomedical Research Centre and secured his hospital’s membership of the European CF Clinical Trials Network, he has played a key role in establishing Southampton as one of the lead centres for trialling new CF therapies. These include the life transforming CFTR modulators which are now licenced and available to treat people with CF across the UK.